I should note that I’m not the most experienced watcher of The Bachelor/ette. I haven’t been in it since the beginning. Really I only got into it during Ali’s season because she kinda reminded me of Jessica Simpson somehow (??) and one dude got a tattoo that had a shield adorned with “11 studs, for the 11 studs” still on the show at the time. That’s right, he got a tattoo while there were ELEVEN contestants left on the show. They left that dude (Austin, I think) on an iceberg, by the way. Later that season a guy in a cast tried to storm off-set by climbing over some moderately high wall or something. It was glorious. I was in from that point on.

So I’m not an expert, but for those of us who have watched for some time, there’s an ebb and flow to every season. There’s something comforting about the way Chris Harrison says The Most Dramatic Season Ever… every single time, a gentle lie that he and we both need to get us by. All of this brings us to our first false flag of the episode, and it’s a big one:

The point of the rambling renaissance above was to say that there’s a familiarity in the way in which the characters on this show reveal themselves. You can pick sleepers and favorites and villains from the first episode, not just based on the actions themselves, but because each person vying for JoJo’s heart is just an iteration of a previous doofus who fell before him. Sure, there are differences; things get goofy when you make a copy of a copy, after all, but as another show that dealt heavily in replicas said best: “all this has happened before, and will happen again.” Which is to say: We’ve seen Chad before, and we’ll see Chad again. Chad is an echo of Olivia, who herself was a distant echo of Courtney who was the first and only villain I’ve seen win it all. I’m told that the winner of Jake Pavelka’s second season was also considered a villain, but I’m admittedly not familiar enough to know. But let’s get to Chad and his dastardly, hungry actions.

The first problem with Chad, despite what some might think, is not his attitude, but his inattentiveness to his beard. I’m a known anti-beardite, but this isn’t about the beard being bad, because it’s not. It’s a good beard and it suits Chad well, but it is always, always scraggly. It’s like he’s the bearded version of the guy who has a constant five o’clock shadow. I don’t get how a guy this devoted to himself keeps his beard at such a sub-par length.

Okay then there’s the attitude, which clearly rubs our house full of let’s-just-chill-and-work-on-this-tune bros the wrong way, except for Daniel who has done nothing to make us think he’s human. He’s distant and aloof, preferring to do pull ups with luggage strapped to himself and talk entirely too much about protein shakes than to devote any time to a song for JoJo. The classic aspect of this is that Chad is Here To Win. He’s here for JoJo and not to be friends with anyone else. He… is one of the people that validates the name of this here blog. The upside of this approach is the potential to turn the bros against each other in an attempt to follow suit — and even if they do, they’re still just followers to your plan of attack. The downside is burnout potential. At some point, the bachelor/ette wants to see their potential partner be able to get along with other people because presumably the two of them will need to function in a society at some point. Playing the villain from day one is an aggressive maneuver with a significant payout but it carries with it a ton of risk. It’s shooting the moon. You’re playing the game no one else is… but there’s a damn good reason no one else is playing it.

The weird aspect of Chad’s approach is that he simultaneously appears to be the only one who understands that this is essentially a game show, but also ignorant of viable in-game strategy. He repeatedly offends others by breaking the unwritten rule of interrupting a conversation with JoJo despite already talking to her, which frankly is smart. Chad’s right about one thing: Alllllll of these dudes are here for her, but get way too focused on being there for each other. Chad gets that. At the same time, he repeatedly puts his foot in his mouth in his time with JoJo, including on the group date when he calls her “naggy.” There’s honesty and then there’s being rude, and the more “honest” Chad is, the more it’s going to come off as rude down the line, unless he can make some adjustments or gain some sympathy and frankly I don’t know where you go for sympathy after you play the “my mom died” card on the first date*. Talk about going for it.

The thing about shooting the moon as a strategy is that it is most viable as long as no one notices that you’re doing it. You can only reveal yourself successfully once you’ve played your hand to the point that there’s nothing anyone can do to stop it. This is not the way Chad has chosen to play his hand. The only thing needed to prevent someone from shooting the moon is for another person to be willing to jump on a grenade for the betterment of everyone. We haven’t quite found that person yet, but it looks like Erectile Dysfunction Evan might be our man. Perhaps JoJo’s connection to Pavelka should give us pause before dismissing Chad’s chances, especially since he knows what JoJo wants (as he told us repeatedly), and that’s a Real Man.

Okay, so that was a lot. As a reward for your patience, here is Chad eating everything in the god damn house: 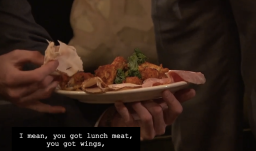 *Note for JoJo: When someone says they “inherited” something, especially a pet, it usually means the person who they inherited it from is dead.

False Flag #2: Everything Else

OKAY ONE LAST NOTE ABOUT CHAD:

He really was being an enjoyable dick/villain. He even pulled an Irish Goodbye in the middle of people confronting him, and then likened their weak sauce confrontation to West Side Story:

Buuuuuuut he slipped up by letting Alex The Small get under his skin, and it really looks like he lets that continue next week. If you’re gonna be the bad guy, you gotta fully embrace it. This has the looks of a guy who is going home by week four, honestly. Also he condensed his absurd amount of food from two plates to one, but for some reason chose to pile it all on the smaller plate. Rookie move, bruh.

All images are property of ABC